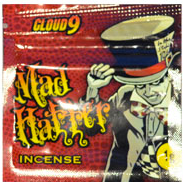 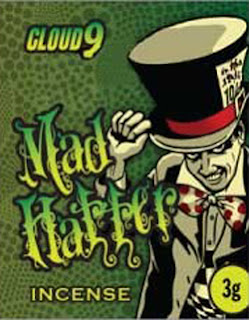 Cloud 9 Mad Hatter is a strong product but it doesn't have very long lasting effects. It's a one of the more finer blended incenses I've had, the bottom of the bag was very powdery. The incense has a good smell. The taste is nothing special but it's not bad, it's a menthol taste. It has kind of a glittery look to it. The effect comes on pretty quickly and strong, I could start to feel it after the second hit. It's a pretty potent blend but the effect only lasts about 30-40 minutes and then it's gone completely. One good thing about this product is that there was no hangover effect like some of the other strong blends have, although it did make me a little tired when I was just laying around and smoking.
I bought this at a headshop in Illinois for $30/3g.


UPDATE: NOT-Approved!: July 11th, 2012
They changed it again! Even the good stuff that I was able to get has been switched up and is now weaker. It may be good for some but I like the strong stuff and this new blend isn't cutting it. The plant base changed to a dark green with green colored stems and leaves mixed in (it looked like food coloring) and it smelled kind of like the apple pucker alcohol.

UPDATE: Semi-Approval: June 7th, 2012
The green bag remains good in Missouri although it has changed slightly once again but the red bag with a csquare hologram symbol was no good. It came full of huge stems, was very light and just wasn't near as good as the regular Mad Hatter. Up to this point all of the Mad Hatter incense was a sure thing, but I guess there's quite a few companies printing out their product as Mad Hatter now. Beware of fake products.

UPDATE: Approval: Feb 28th, 2012
I saw this at a local liquor store so I figured I'd pick up a pack and see if it was still any good after the most recent bans. This is one of the few products that doesn't say DEA compliant on it, so I'm not sure on the legality. I've heard of people getting busted with it but other times the lab tests come back negative, it's really random.
This time around it had a slightly different smell, but it was still minty. It seemed to be the same old good product with some very minor, mostly unnoticeable changes in the effect.

UPDATE: Approval: December 7th, 2011
I have tried this product again on December 7th, 2011 to update this review. This time it came in a little red baggy instead of the usual bigger green ones, but it was the same thing. Still the same old product, nothing changed but the package.

**According to an anonymous commenter below, http://www.madpotpourri.com sells fake Mad Hatter.**
Posted by Admin at 10:02 PM